We pick you up from your hotels between 09:30 and 09:45 with our guide and vehicles belonging to our company. We are starting our tour with our first stop Uchisar Kale.

. Here you will have the chance to watch and try traditional pottery art. Pottery from the clay soils used in making the city and Turkey's longest river, which comes from the ancient times, also known as Hallys Kizilirmak'.

We visit a store with a pottery and pottery workshop. You can watch the pottery and pottery making and also try it. Our next stop is to go to Devrent (Dream Valley). In this valley, which will enchant your dreams, you can have a fun time by imagining the visual rock shapes formed differently from the existing rock shapes.

Finally, we move to Urgup and the family of fairy chimneys, which is the symbol of Cappadocia, is seen. At the end of the day, we stop by visiting one of the naturally-made wine factory of Cappadocia.

The Red Tour takes around 8 hours. In some parts you may need to walk into the beatifull valleys of Cappadocia, we reccomend you take comfortable shoes, sunglasses and a hat if possible.

The Red Tour ends at 16:00, after which the group is taken back to hotel. 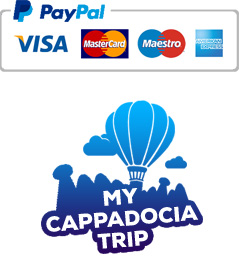